Working with historic circulation data the other day I discovered that affiliates of the Washington Research Library Consortium borrowed some 20,653 monograph titles from Mason’s libraries during FY 2012-13.  Thinking about Mason’s collections and those of fellow WRLC members, I assumed that the strength of our STEM collections would surely push those sorts of titles to the top of any “what gets borrowed sorted by LC classification” list…

Not exactly.   Here’s an excerpt of the list that aggregates the number of titles borrowed by each book’s LC classification number.

LC classifications with a circulation of at least 100 titles:

The top ten subject classifications account for 8,311 titles or just a fraction over 35% of the all circulation to WRLC members.    The first STEM subject appears in position # 7 (the QA’s) and not again until #24 on the list  (Medicine – Internal Medicine).   Totaling the titles for all STEM classifications shown in this list covers 1980 titles  (or about 8% of all titles circulated).   I can think of a couple of alternative explanations for this phenomenon:

A colleague pointed out yet another possibility:  my 100 circulation threshold may be suppressing the count for STEM titles–given that those areas tend to have more finely-grained LC classifications.

And finally, my friend Dorothea Salo (@LibSkrat) pointed out that “need it now” might be the reason STEM borrowers don’t request titles from other libraries:

More research needed to nail down that last one down.

[update 3/28/2014]  Today my colleague Theresa Calcagno pointed out another factor that I haven’t thought about–it might be that e-books in STEM subjects are suppressing the number of circulations for those subject areas.

I reworked my SQL and ran a variation of the query to get numbers on titles borrowed by Mason-affiliated borrowers during the same period: broken out as before by each title’s LC classification.   This dataset included 66,733 distinct titles (the WRLC dataset had 20,653 titles).    As an aside, some 6,357 titles were common to both datasets.

Here’s the result for any class with 450+ circulations: 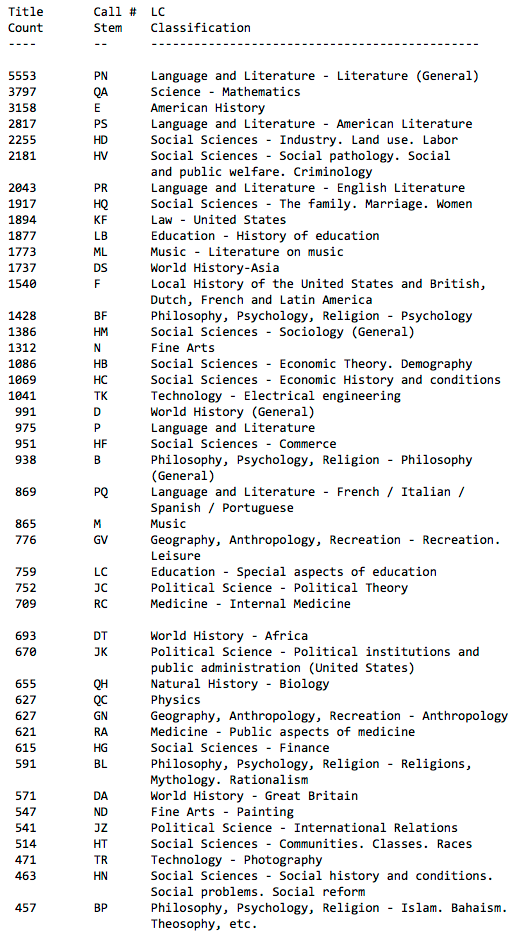 QA (computer books for the most part) jumped up to #2 on this chart but otherwise, the STEM titles just don’t seem to circulate like those in the Social Sciences and Humanities (next best showing for a STEM discipline was TK at #19).  I’m ready to say I have an answer for what I’ll call the  “Salo postulate”

I’m now wondering what, if anything, the similarities and differences in these two lists can tell me about collection strengths and weaknesses at Mason and WRLC libraries.