A few months ago we placed a 12 unit laptop self-checkout kiosk in one of our libraries.  It is certainly being used though not as much as I had originally expected.  Possible reasons:

Ignoring checkouts by library staff, we had 857 circulations of a laptop over the past 53 days (since 02/01/2016).  Averaging the activity across that time period comes to 16 laptop loans each day.  If we also toss out loans of less then 10 minutes, the number drops to 842 circulations or roughly 15 per day.

Given the hours the library’s open and the inherent downtime required for laptop recharging, we can guesstimate the average availability for each of the twelve laptops at something like four (4) borrow/return cycles per day.  It follows then that a 12 unit kiosk could support perhaps 2500 charges during a 53 day period.    Using those parameters, we’re utilizing roughly 33% of the system today.   That seems OK for a newly minted service and I’ll be interested to see how the numbers track up or down in coming months.

Later (and mostly because I’m looking for things to graph as I study Tableau),  I decided to dig a bit deeper.

In the visualization below, each line is a particular borrower (identifying information blurred out).  The blue line grows with each circulation by that same borrower.  To sense the scale, that user on top line checked out a laptop 36 times during the 53 day period. 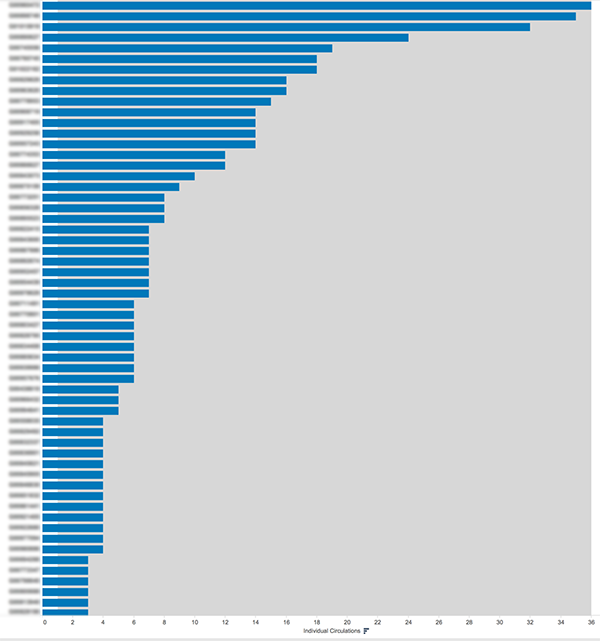 Pareto would be pleased.  As the graphic demonstrates, a very few users are making heavy use of the system, others not nearly as much.    During this 53 day period, a bit less than a third of our usage (242 circulations) was racked up by just 14 users (5.01% of the total borrower population).

Finally, I decided to join the kiosk statistics with some information in our Voyager system.  The result is a visualization that highlights the academic status of our borrowers.  Each green bubble is an undergraduate borrower, the size of the bubble scaled to the number of times that person borrowed a laptop during the test period.  The orange bubbles are graduate students.   Thus far, the data suggests that borrowing a laptop from a kiosk is mostly something undergraduates do. 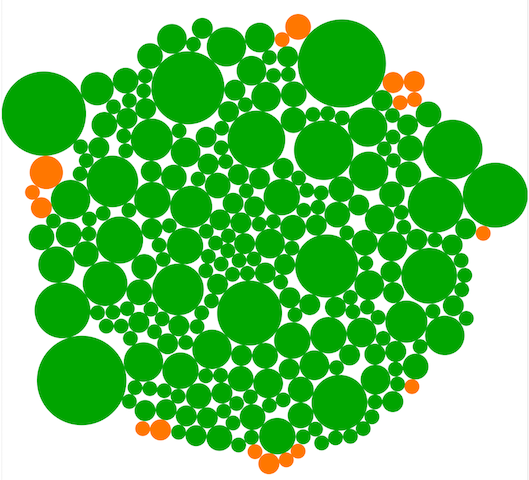 And what major made heaviest use?  Biology majors accounted for 17% of all laptop circulations.  2nd place? Undecided/Undeclared at 11%.